This may be the last summer to enjoy the grass and trees on the Thames Path as it passes along the South Bank in front of the ITV studios between Blackfriars and Waterloo Bridges.

Here the path is under a lovely canopy of trees but this is the very spot where the Garden Bridge is due to land. 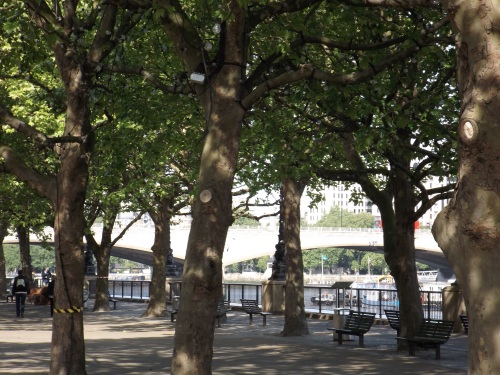 According to The Observer thirty mature trees will be felled to make way for the bridge which will be planted with new trees.

Lambeth Council intends to grant a new lease for its riverside grass so that a retail building can be placed there to support the south end of the Garden Bridge.

The deadline for objecting to Lambeth Council’s ‘Notice of intention to dispose of Open Space’ is Tuesday 2 June. Objections to this proposal can be sent to [email protected]

There are moves to find the body of Henry I who is buried in Reading.

The main report is in The Daily Telegraph.

Henry I was the son of William the Conqueror and brother of William II. Henry died in France on 1 December 1135 and his body was buried a month later, on 4 January 1136, in the abbey which had founded in Reading.

The Thames Path guide has always maintained that Henry is under the school playground next to St James’s Church.

This is the modern successor of the Reading Abbey which covered much of the adjoining Forbury Gardens park.

There were recent suggestions that the body was under the park but Philippa Langley, who was involved in the search for Richard III, has said that the King may lie under the playground or school car park. The latter spot, south-east of today’s St James’s church, now seems to be the most likely area for initial investigation.

The burial was near the abbey’s high altar but the exact length of the abbey church is uncertain.

The church’s dedication to St James recalls that the abbey church held the hand of St James the Great whose remains are now in Santiago de Compostela Cathedral in Spain. The hand was the gift of Henry’s daughter Matilda who had inherited the relic through marriage.

The feature in the magazine recommends The Maids of Honour at Kew, famous for its secret recipe Tudor tarts.

Also highlighted is Burgers at Marlow which for many is the natural place for tea after a day’s walk.

Thames Path pioneer David Sharp has died at the age of 89.

David Sharp, a superb draughtsman, artist and writer, lived yards from the River Thames in Barnes.

He was responsible for the look of Ramblers’ Association (as The Ramblers was known) and Open Spaces Society publications but his lasting legacy is the Thames Path.

He walked what was possible and lobbied for its completion and recognition.

The Ramblers’ Association report on the towpath and its gaps, including central London, was written by David. This was the document, with very clear hand-drawn maps, which he handed to me in 1981 when I was appointed temporary Thames Path officer to write the feasibility study.

It was the job that David should have had and would have enjoyed but he could not offer himself since he was still working for an advertising agency.

But he gave me huge help and advice.

My task was to visit every riparian council and landowner along the Thames and produce a report for Thames Water and the Countryside Commission. It took more than a year and included some occasionally frightening moments trying to check lonely overgrown paths alongside the fast flowing the river.

David laid out the possible route and I had the challenge of tweaking it during consultations and negotiations.

Three new bridges and 16 miles of new riverside path had to be put in place to achieve the national trail.

After Environment minister Virginia Bottomley had approved the path there came the time when it was officially opened. It was a privilege to be with David in 1996 as he walked along the river from Greenwich to the ceremony at the Thames Barrier.

Subsequently David wrote the official guide taking the walker downstream whilst I wrote the guide for the walker wanting to start in London. He was always helpful and generous when I went to him with a problem and sometimes he contacted me with a minor change or temporary difficulty. More than once we checked out a problem together.

Until last year David was still co-editor of South East Walker where he continued to highlight Thames Path updates and possibilities.

I am sorry to learn that he declined the MBE but pleased that he was recognised as the key player in the long story of the Thames Path which had first been proposed in the 19th century.

The Times has an obituary and OSS general secretary Kate Ashbrook has written an appreciation.

The Tudor Pull today Saturday 16 May 2015 will see Thames Watermen’s cutters rowed down the Thames from Hampton Court Palace to the Tower of London.  Craft include the Royal Barge.

SIR – The problem with London’s proposed garden bridge (Letters, May 8) is the location.
Its trees would obstruct the splendid views of the towers of the City of London and the dome of St Paul’s Cathedral, seen from all the way across Waterloo Bridge and Hungerford footbridge.
Such a project would be more welcome in a place where it might enliven a dull length of river, such as near Vauxhall Bridge, rather than downgrading one of London’s most evocative views.
Hal Moggridge
Filkins, Oxfordshire