The first ever national online pub guide has been launched by CAMRA.

The guide is called whatpub.com and has been compiled by thousands volunteers.

A test on Lechlade brings up The New Inn and The Crown as one would hope.

This site is handy for bed and breakfast searches as well finding  a pub with food and real ale. 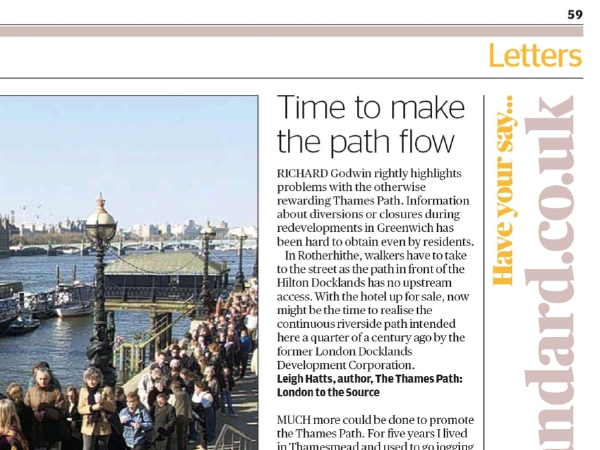 CAMRA’s Good Beer Guide is of course also a good pub guide with always good suggestions for which pubs on the Thames Path are worth stopping at for lunch.

The 2014 edition just published confirms well-known pubs such as The Waterman’s Arms at Eton, which is on the path, and The Crown in Lechlade.

The Thames Path seems to get more mentions this year.

The most handy listing must be for The Bounty on Cock Marsh near Cookham where opening used to be vague. Indeed the address has always been difficult as it is just over the railway bridge from Bourne End.

Before the footbridge was attached in 1993 you had to ring a bell and be rowed across from the station side. The delight is that the pub cannot be reached by car.

Editor Roger Protz has nailed down some opening times: 12 to 11pm in summer and weekends only 12-dusk in winter.

The Thames Path in London has been named the second best urban walk in the world.

Lonely Planet’s 1,000 Ultimate Adventures (£15.99) published this month has the 32 mile walk through the British capital ahead of the Great Coast Walk in Sydney and the Berlin Wall Trail.

Top trail is the Tijuca rainforest in Rio de Janeiro famous for Mount Corcovado and the huge statue of Christ the Redeemer.

The Daily Mail has the best pictures including one of a conservancy gate which will be familiar to those walking beyond London.

Convoys Wharf at Deptford is open on Saturday 21 September (11am-4pm) as part of Open House London. The site is the former Deptford Dockyard founded by Henry VIII and now due for redevelopment.

In a corner of the dockyard, at the end of Watergate Street, is The Master Shipwright’s House which is 500 years old this year. The building is open on both Saturday and Sunday (10am-1pm).

Convoys Wharf will have a pop-up cafe but the Dog and Bell is in nearby Prince Street. The pub on the Thames Path is in the just published Good Beer Guide.

A post box has appeared just above the water on the side of Sonning-on-Thames bridge.

It is a mystery to Royal Mail and villagers including Uri Geller.

A blue plaque in honour of boat builder Samuel Saunders of Saunders-Roe fame has been unveiled on the Royal Mail sorting office in Goring-on-Thames. The building, a former boathouse, is in the High Street at the end of the bridge.

He was born in The Swan at Streatley on the opposite bank  in 1857. His father Moses was the last ferryman and Samuel inherited the boat-building business. He moved to Cowes on the Isle of Wight in 1901 only because he was building boats which were too fast for the Thames.

The Thames Festival starts today in central London and runs, for the first time, for ten days.

There are walks, displays, music and even short cruises with Andrew Motion and Dan Cruikshank.

Today sees the Great River Race crowding the Thames with craft from London to Ham and on Saturday 14 September there are barge-driving races between Westminster and Tower Bridge.

The focus is an open air cinema at the Samsung site, between the Oxo Tower and the National Theatre, where short river films can be viewed from deck chairs. You can enjoy a ride through the Pool of London from a life boat or sail down the estuary in a few minutes.

Most events including the cinema shows are free.

The Festival climax is not fireworks but something more ambitious: the floating 1513: A Ship’s Opera on Saturday 14 September. One act can be seen at 6.40pm off Trinity Buoy Wharf. The Thames Path by the O2 (Dome) should provide a good view. The climax is at dusk by Tower Bridge with light sound and noise.

With the start of the Thames Festival in London approaching this weekend walkers on the Thames Path may wish to look out for the Thames Relay.

A bottle of source water is being taken by walkers, swimmers and captains of various vessels down to the capital and out to the estuary.