The Queen and Duke of Edinburgh travelled on board the Alaska, built in 1883 and the oldest working passenger steamer on the Thames, from Hambleden Lock to Greenlands for a garden party. The towpath was crowded.

ITV News has  a report. 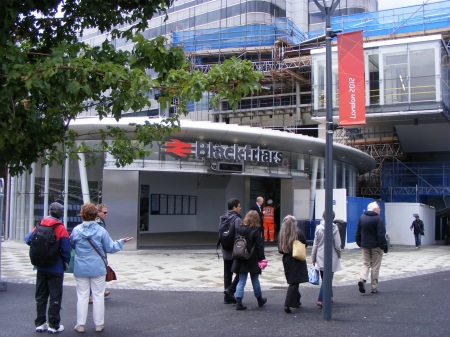 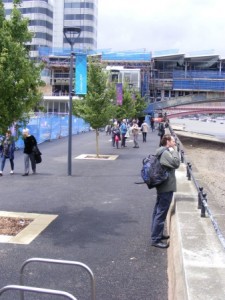 The riverside path between the Founders Arms and Blackfriars Bridges with its new station entrance is slowly emerging as barriers are cleared.

We can now see how it will look. The Olympic decorations are up already.

It was interesting to see Bob Tough’s obituary in The Daily Telegraph on the eve of the Jubilee weekend.

His boatyard at Teddington, now largely built over, was where the Havengore and Royal Nore vessels were built. He helped to design them and both took part in the Thames Pageant.

The obituary reminds us that he was a sixth generation boatbuilder.

The Bablock Hythe ferry which is said to be over a thousand years old may run again soon.

It had several revivals in the 20th century including 1981 and again briefly in 1992.

It has long been operated by the pub which has had at least three names in living memory. Today the landlord of the Ferryman Inn is Peter Kelland.

He has been asked by Oxfordshire County Council if he will start it up again. The council has even revived the much opposed idea of a bridge in its Local Transport Plan. But the missing link could be part of Sustrans cycle route 57 which would provide an income stream.

The planned ticket price is 50p and the ferry could be running again this year.

Indeed if the ferry is reliable then most Thames path walkers would probably prefer to stay on the towpath and use the ancient crossing. Today’s official alternative is to cross upstream at Pinkhill Lock and have a long walk inland.

Peter is appealing for help in raising the £9,000 needed to restore the boat damaged in the 2007 floods.

Plans to allow walkers to cross Deptford Creek nearer to the Thames than the main road bridge are now available for consultation.